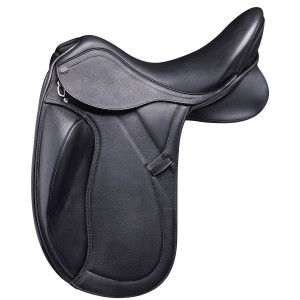 I began riding when I was two years old, and I have had the horse bug ever since! My love for dressage started with my first horse, Aavignon Andante, seven years ago. Together, we have trained up the levels and debuted at Prix Saint Georges in 2015, earning a 65.4% our first time out. My other horse, Pellegrini, and I were the 2015 NAYRC Region 7 Team alternate by 0.3% and we took the 2015 USDF Region 7 Young Rider Championship title with a 69.342%. Pelle and I also debuted our first Intermediate 1 test in 2015 and received a 64.3% together. Currently, I am riding Donna Richardson’s Welt Erbe in hopes of making the 2016 NAYRC Region 7 Dressage Team.

There's a huge improvement in my hip mobility and the flap/block is definitely not intrusive! I really hope I can help spread the word about these saddles because I think that they could enhance a lot of people's riding.